From CADA
Jump to: navigation, search

Chinese Gold series has been on in NiMK, Amsterdam.

The work was part of the Space Invaders group exhibition that explored the increasingly blurred boundaries between video-game space and real space. It was on show from the 28th of August until the 7th of November with the opening night on the 27th of August.

NIMk's new exhibition, Space Invaders, reveals the influence of games on art and society. The exhibition explores how physical reality and (computer) games increasingly influence each other: the physical world migrates into gaming systems, and gaming elements find their way into physical space.

This is typical for the early 21st Century, when computer games become more and more popular and realistic, and have an increasing impact on real life. However, these contemporary phenomena can be traced back to earlier developments and tendencies in society and art.

In Space Invaders: Art in the Computer Game Environment the Netherlands Media Art Institute brings art and games culture together. In an artistic, playful yet serious manner, Space Invaders reveals the influence of games on art and society. This group exhibition with Dutch and international media artists examines the increasing blurring of the boundaries between game worlds and reality. In Space Invaders media art works illuminate the migration of the physical world into gaming systems. Conversely, gaming elements are more and more finding their way into physical space. By infiltrating both game environments and real spaces, the artworks clarify the nature and influence of the computer game environments, and provide greater insight into the role that computer games play in contemporary culture.

From minimalistic adventure games based on text to the detailed cities of Grand Theft Auto, which are based on the actual street plan of New York, the world of the computer game is developing to ever more realistic levels. In addition, games are presently no longer defined by progress in a literal sense – beating a field – but increasingly concentrate on creating an environment in which the player has the freedom to set out on his or her own explorations: an environment that looks and feels like the real world. Moreover, the internet has created conditions for on-line gaming, which often has still less to do with winning and losing and more with the cultivation of social communities and human networks that extend into 'real' life, like Farmville. Equipped with wireless technologies and GPS, games have abandoned a stationary existence to make their way through physical space as mobile and other available applications. In short, tentoonstellingsgames mix various media and physical spaces to create an alternative, playful reality. Physical and virtual space are becoming more and more hybrid in nature and constructed and invented spaces come ever closer together.

With this information as background, one can recognise two approaches in the exhibition Space Invaders. On the one hand the exhibition looks at the most fundamental environment of the computer game: inside the computer. What sort of connections do the games and artworks make between physical and virtual space in the computer world? For instance, while in early text games an imaginary space was evoked by means of text (Colossal Cave Adventure), there are now the detailed cities of Grand Theft Auto, and recently the development of 'augmented reality' games has come into vogue, games that mix computer images with reality in a plausible manner (LevelHead – Julian Oliver). On the other hand the exhibition presents the introduction of game elements into the physical world: from the performance of video games in 'real life' (Cosplayers – Cao Fei), and the reduction of the urban game ‘Parcours’ to a virtual and digital level (Parcour Ready Played – Ludic Society), to works that remove the game data from the screen (What It is Without the Hand that Wields It – Riley Harmon, First Person Shooter – Aram Bartholl).

Walter Langelaar also blends the physical exhibition space and virtual gaming space by means of a gaming engine on which the visitor can exert influence. The visitor has to relate here physically to the dizzying mixture of physical and virtual space. Finally, the duo JODI present their performance-installation SK8MONKEYS ON TWITTER, in which unreadable texts are uploaded to a twitter account by means of 'skating' on an keyboard, and a connection is made with the skateboard games by Tony Hawk. In short, Space Invaders shows the increasing blurring of the boundaries between the real world and the game world. In this exhibition gaming is more than sitting in front of a screen and playing a game; the relation with the real world is never far away.

Space Invaders: Art in the Computer Game Environment has been produced and curated in association with Heather Corcoran from FACT, Liverpool.

The educational program of this exhibition is supported by the Amsterdam Fund for the Arts (AFK).

Thanks to the VSB Fonds

The work was shown along with other works of the following artists: 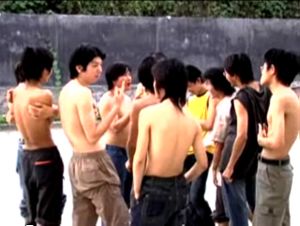 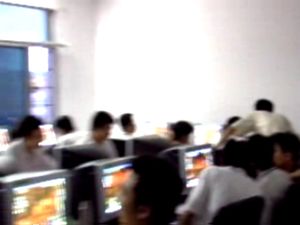 Given notes on installation:

NiMK provided a video with how the installation was displayed during the Space Invader exhibition which was made available via YouTube. 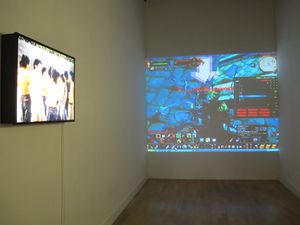 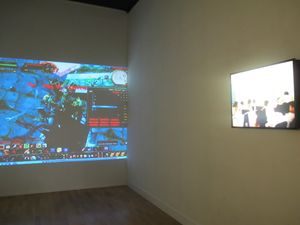